Black seed, considered to be a magical seed, is truly one of the most powerful seeds. In Islam it is believed to be a cure for all diseases except death and is called ‘the blessed seed’ in the Middle East.

It has many other names viz. black cumin, roman coriander, onion seed and black caraway. It resembles the shape of a sesame seed, and is commonly used as a spice in Indian, Pakistani, Persian and Middle-eastern cuisines. The chemical composition of the black seed is proved to be very rich and very diverse.

The black seed is suggested to have been used as early as the 5th century B.C. by Hippocrates and a few others. It was also claimed that a bottle filled with black seeds was found inside the tomb of the Egyptian King, Tutankhamen. 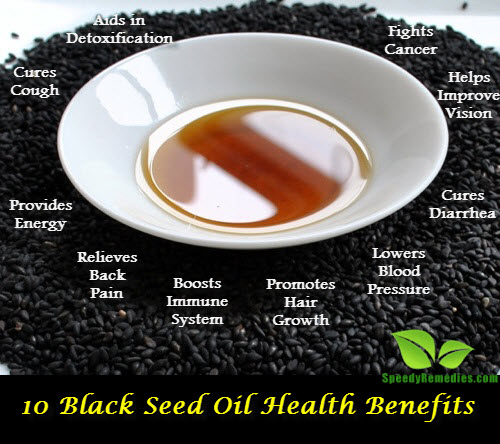 The black seed oil is derived by pressing the seeds, this nutrient rich oil contains about a hundred healing components, and each component works together with the other components to aid the body in maintaining an overall aspect of well being. Research shows that this is possibly the only herb with such an extensive range of healing properties.

Black seed oil comprises two major components, one is nigellone and the other is thymoquinone. The first component helps with respiratory ailments, at the same time acting as an antihistamine. The second contains anti-inflammatory substances along with being an anti-oxidant which helps in cleansing the body of toxins.

Since ancient times, black seed and its oil are being used to cure a wide range of ailments. Here are ten of the many benefits of black seed oil.

To conclude, it can be said that indeed the black seed is a vitamin of life. And finally to cure a disease also requires faith in the methodology used for the treatment.