You are here: Home / Amazing Tips / 11 Habits that Harm Your Immune System

Being healthy is not always about frequently washing your hands, getting vaccinated or avoiding unhealthy people or surroundings. It turns out that your daily routines – like how you eat, how much you sleep or your level of stress – may also impact your physical health.

Your immune system is responsible for preventing and fighting infections, germs and tumor cells. If your immune system is impaired, your body becomes more susceptible to a number of diseases and illnesses.  Frequent sickness and allergies, tiredness and fatigue are some of the symptoms of an impaired immune system.

However, your daily practices play an important role in the functioning of your immune system. So, in order to stay healthy, you need to kick all your unhealthy habits in the butt.

Let’s evaluate some of your everyday habits affecting your immune system. 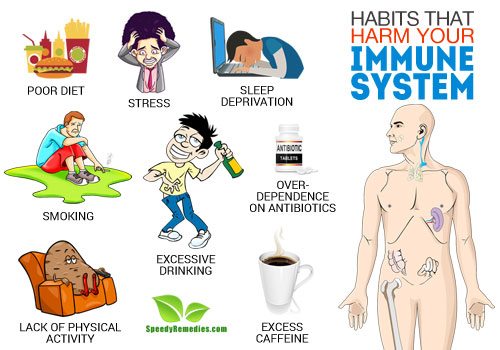 According to a 2014 study published in the Nutrition Journal, over-indulgence in sugar, salt, fat, artificial sweeteners, gluten and genetically modified foods can have a negative effect on your immune system.

According to a 2012 study published in the Proceedings of the Nutrition Society, obesity impairs immune system by altering leucocyte counts and cell-mediated immune responses.

What you should do: Include plenty of fruits, vegetables, milk and nuts in your daily menu.

It is a known fact that stress affects your overall health. When your body undergoes stress, it produces a stress hormone – cortisol. This hormone is responsible for dealing with stress by closing down unnecessary bodily functions like immune system and reproduction, so as to allow the body to direct all its energy towards dealing with stress.

This function of cortisol is short-lived, just long enough to deal with the stressor.

Under stress, when your immune system is suppressed by cortisol, your body becomes more susceptible to disease causing pathogens. This explains why people who are constantly stressed are always getting sick.

According to a 2006 study published in the Journal of Neuroimmune Pharmacology, chronic stress can increase the production of pro-inflammatory cytokines. Higher levels of cytokines have been linked to risks for several conditions, such as cardiovascular disease, type 2 diabetes, mental health complications, and some cancers.

What you should do: Practice stress-reducing activities like yoga, meditation and laughter therapy.

Lack of sleep can affect your immune system. During sleep, your immune system releases different types of cytokines. Some of these help promote sleep, while certain others protect your body against infections and diseases.

Sleep deprivation may decrease the production of these protective cytokines. Meanwhile, lack of sleep leads to reduced number of infection-fighting antibodies and cells in your system.

According to a 2004 study published in the Nature Reviews Immunology, sleep deprivation has detrimental effects on the immune system.

What you should do: Fop.r most adults, experts say the optimal amount of sleep is from 7 to 8 hours. Adolescents need 9 to 10 hours of sleep, while children need 10 or more hours of sleep.

However, more than 10 hours of sleep for adults may result in poor quality of sleep with difficulty in falling asleep or staying awake.

Cigarette smoke contains high number of tar and other chemicals that weaken your immune system, making it ineffective when it comes to fighting against infections.

If your immune system is attacked on a daily basis, it becomes susceptible to autoimmune diseases like rheumatoid arthritis and multiple sclerosis. In such diseases, your immune system mistakes your healthy cells as foreign antigen and attacks them.

Smokers exhibit an elevated count of white blood cells, about 30% higher than that of non-smokers, states a 2004 study published in the JAMA Internal Medicine.

What you should do: It’s quite obvious – stop smoking. Avoid passive smoke. Try to avoid spending time with people while they are smoking.

Drinking too much alcohol can harm your immune system. Chronic alcohol use reduces the ability of white blood cells to fight harmful bacteria.

Excessive drinking also interrupts the production of cytokines, causing your body to produce either more or less of cytokines. Less cytokines make you susceptible to infections, while abundance can damage your tissues.

Excessive alcohol also suppresses the T-cells development and may impair the ability of your body to attack tumor cells. This makes you more prone to catching infections and less capable of destroying cancerous cells.

National Institute on Alcohol Abuse and Alcoholism states that chronic drinkers are more likely to contract diseases like pneumonia and tuberculosis than non-drinkers.

Drinking excessively in a single session can also compromise your immune system.

According to a 2014 study published in the Journal Alcohol, after few hours of binge drinking, body system was found containing fewer circulating monocytes and natural killer cells and higher levels of different cytokines that signal the immune system to become less active.

Eat while drinking so as to slow down the absorption of alcohol in your body. Opt for beverages with lower alcohol content. Drink slowly or have one drink at a time.

Moderate exercise training causes favorable changes in your immunity and a reduction in incidence of upper-respiratory illness.

According to a 2014 study published in the American Journal of Lifestyle Medicine, during each bout of moderate exercise, an enhanced re-circulation of immunoglobulins, neutrophils, and natural killer cells occurs that persists for up to 3 hours post-exercise.

The study adds that although this exercise-induced surge in immune cells is temporary, it improves overall surveillance against pathogens.

A regular exercise routine appears to extend periods of immunity. Regular performance of 2 hours of moderate exercise per day is associated with a 29% reduction in risk of picking up upper respiratory tract infection (URTI) compared with a sedentary lifestyle, states a 2007 study published in the Journal of Applied Physiology.

However, the study adds that post-exercise immune function dysfunction is most pronounced when the exercise is continuous, prolonged (>1.5 h), of moderate to high intensity (55–75% maximum O2 uptake), and performed without food intake.

What you should do: Maintain a regular moderate exercise routine to stay healthy.

According to a 2011 study published in Nature Reviews Microbiology, antibiotics treatment can result in dysregulation of host immune homeostasis and an increased susceptibility to disease.

The overuse of antibiotics is the key factor leading to antibiotic resistance.

According to the 2013 report by the Centers for Disease Control and Prevention, 2 million Americans acquire serious infections with bacteria that are resistant to one or more of the antibiotics designed to treat those infections. At least 23,000 die every year due to these infections.

What you should do: Avoid taking antibiotics unnecessarily. Take them as prescribed by the doctor and make sure to complete the course. Do not use leftover antibiotics. Never take nay antibiotics prescribed for another person.

Too Much of Hygiene

You might be well-aware of the fact that lack of hygiene weakens your immune system and make you susceptible to a host of infections and diseases. But new research suggests that childhood exposure to germs may in fact strengthen the immune system and protect you from developing allergies and asthma in later life.

According to a study published in the Clinical and Experimental Allergy in 2006, lack of early exposure of viruses and bacteria increases the risk of autoimmune diseases. The study contends that this is more prevalent in developed countries where frequent use of antibiotics reduces children’s exposure to germs.

What you should do: Don’t go overboard with cleanliness. It is okay to let your children play in places where they have contact with soil and vegetation, which are rich in beneficial microbes.

Excessive caffeine stimulates your nervous system by increasing the levels of stress. Too much stress causes the release of stress hormones like cortisol.

Cortisol suppresses your immune system, thereby decreasing the ability of your immune system to fight infections and remove damaged and abnormal cells from your body. Elevated cortisol is also responsible for a number of health issues related to heart, blood sugar, and high cholesterol.

What you should do: Limit your coffee consumption to 400 milligrams (mg) a day. Don’t rely on your coffee to wake you up and keep you going.

Loneliness is an unpleasant feeling and can harm your immune system. According to a 2010 study published in Annals of Behavioral Medicine, loneliness is associated with underactive or impaired cell immunity.

Loneliness causes your body to produce stress hormones. The stress response of your body triggers cellular changes increasing the chances of getting ill by affecting the immune system.

A study published in the Proceedings of the National Academy of Sciences in 2015 states that the stress response activated in the brain by loneliness affects the production of white blood cells. White blood cells are the major component of your immune system.

At the same time, it also decreases the production of antiviral proteins that reduces the body’s ability to fight infections.  The study adds that loneliness is linked to increased risk of chronic disease and mortality.

What you should do: Socialize frequently. Socializing can boost your health and in turn boost your immunity.

Proceedings of the Nutrition Society: Obesity, inflammation and the immune system

Nature Reviews Immunology: Sick and tired: does sleep have a vital role in the immune system?

National Institute on Alcohol Abuse and Alcoholism: Understanding alcohol’s impact on your health

Journal of Applied Physiology: Immune function in sport and exercise

Kidshealth: The Danger of Antibiotic Overuse

Clinical And Experimental Allergy: Too clean, or not too clean: the Hygiene Hypothesis and home hygiene

Annals of Behavioral Medicine: Loneliness Matters: A Theoretical and Empirical Review of Consequences and Mechanisms