You are here: Home / Herbs That Cure / Cinnamon (Dalchini) Benefits

Cinnamon benefits the heart and kidneys. In addition, this herb improves the flow of circulation and strengthens the immune system. Besides, a combination of cinnamon and honey aids in weight loss.

The aromatic herb has an exotic flavor and sweet smell. Hence, it is used for enhancing the flavor of various culinary preparations.

Cinnamon spice is actually the dried inner brown bark of cinnamon tree. Interestingly, it is believed that ancient Romans used this spice as a perfume. 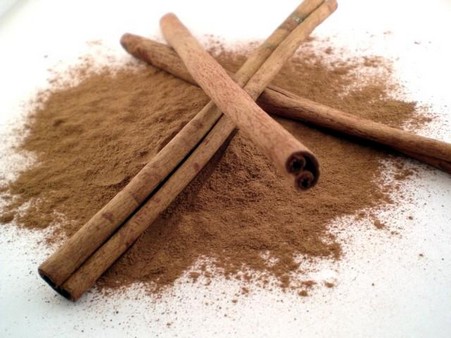 This herb is native to South East Asia. It is grown in tropical climates of Java, Sumatra, Mauritius, Guyana, Borneo, RÃ©union and also in South America, West Indies, etc. Cinnamon belongs to the Lauraceae family.

Cinnamon or Dalchini has antimicrobial, anti-clotting, anti-inflammatory, anti-spasmodic, diuretic, and aphrodisiac properties. It is rich in antioxidants and contains minerals such as manganese, iron and calcium.

In addition, cinnamon oil has astringent, antiseptic and carminative qualities. The soothing aroma of cinnamon comes from an essential oil called cinnamonaldehyde. This oil, however, can be toxic when taken in higher doses.

Besides, cinnamon benefits in the natural treatment of sore throat, common cold, cough, influenza, and hoarseness in voice. It improves colon health and heals issues like indigestion, nausea, vomiting, diarrhea and gas.

Due to its antifungal, antiviral and antibacterial qualities, this herb helps cure infections. In fact, it has been observed that cinnamon has the ability to stop yeast infection that is resistant to medication.

You can also reduce bad breath simply by having a cinnamon chewing gum or rinsing your mouth with a solution of one cup water mixed with a teaspoon of cinnamon powder (use it as a mouth wash). Cinnamon gums, toothpastes and candies, however, may give rise to sores on tongue, mouth or lips.

Apart from these health benefits of cinnamon (Dalchini), the fabulous aroma of this herb boosts brain activity, cognitive processing and has a positive impact on the mood. It is a calming herb that can reduce headache and induce sleep.

Medicinal Uses of Cinnamon or Dalchini

Cinnamon is also used as a natural preservative, especially for meats because it inhibits bacterial growth. This spice is a common baking ingredient and is used in hot fruit drinks as well.

In certain parts of the world, particularly, US and Canada, cassia (Cinnamomum aromaticaum) is used instead of true cinnamon.

Cassia, however, contains higher levels of a plant component known as Coumarin which can be harmful for the liver. Cassia is usually dark brown in color and has a stronger taste.

Individuals suffering from irritable bowel syndrome and ulcers should not take this herb in large doses (more than half a teaspoon) as it tends to irritate the lining if the stomach. In addition, excessive consumption of cinnamon or Dalchini can cause excessive sweating on palms.

Moreover, direct application of cinnamon oil can cause redness, skin irritation or allergic skin reaction. Thus, it should be mixed with base oil and then applied. Plus, remember that cinnamon oil is not meant to be ingested.

Besides, pregnant women should take cinnamon with caution because it stimulates uterine contractions. As cinnamon contributes in blood thinning, its use should be discontinued about two weeks prior to a surgery. It can also interfere with antibiotics, heart medications and diabetes drugs.

Cinnamon benefits the health when taken in moderation, that is, about three grams of cinnamon spice which is equal to 500 mg of the extract. Thus, you can safely take up to one or two teaspoons of cinnamon powder in a day.