You are here: Home / Herbs That Cure / Datura Benefits

Though it is a poisonous plant still datura benefits in healing spasmodic disorders and dealing with respiratory disorders, especially asthma. The leaves, seeds, and root of this plant have medicinal value.

Moreover, datura has been traditionally used for religious visionary purposes. It is also used as a hallucinocinic and intoxicant. 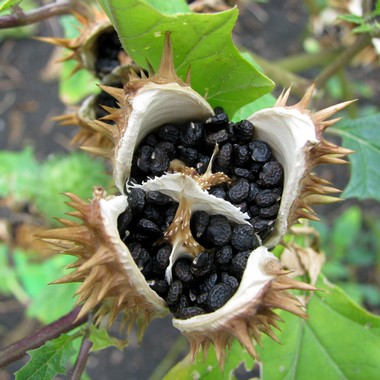 This herb is indigenous to the Indian subcontinent. It is grown in temperate and tropical regions of the world. Datura belongs to the Solanaceae family.

This herb is mainly used as a natural home remedy for respiratory diseases like whooping cough, asthma and bronchitis.

Datura leaves provides relief from pain associated with rheumatism, sciatica, neuralgia, muscle spasms, and so on. Plus, datura benefits in dealing with heart disease and palpitations.

It is believed that this herb can work as a mental tonic and help manage Schizophrenia, Epilepsy, and Parkinson’s disease, provided it is used cautiously. This notion, however, has not been proved scientifically as yet.

Furthermore, it is considered good for relieving toothaches, headaches, earaches, and menstrual cramps. Here’s a video explaining about datura plant and its poisonous effects.

On the downside, though, datura can cause side effects like amnesia, blurred vision, nausea, giddiness, confusion, rapid pulse, hyperthermia, delirium, hallucinations, psychosis, and even violent behavior. Besides, it can cause convulsions and prove to be fatal.

The chemical properties of datura are quite similar to those of belladonna. The herb contains powerful alkoloids, particularly atropine, hyoscyamine, and hyosine in all parts of the plant. It is believed that small quantities of datura seeds tend to improve libido, especially in males.

Earlier, the Chinese used this herb as a surgical anesthesia. At times, datura seeds are mixed in wines and beer to enhance intoxication. Recreational uses of this herb, though, are usually discouraged as it is highly toxic.

Although datura benefits in curing certain ailments, it should be used with caution under the supervision of a qualified physician as its overdose can lead to toxic effects.

Moreover, it can affect the nervous system adversely. Plus, the juice of datura leaves is extremely harmful for eyes.