You must have noticed the formation of a discolored pinkish or reddish patch on your skin as soon as you bump into something. Moreover, this reddish patch soon turns bluish or dark purple in color. This is a bruise, or in medical terms it is called a Contusion. In this condition, blood from the damaged blood cells beneath the skin collects near the surface of the skin but the skin tissue is not broken outside.  While healing, bruises often change color i.e. from reddish to blue or dark purple to yellow or green and back to the normal skin color when the wound finally heals. This color change takes place due to chemical decomposition in the affected area of the skin. Small bruises are generally not dangerous, though they may be painful in the beginning. Natural home remedies for bruises can be used to treat such simple bruise injuries. Certain people are more susceptible to bruises than others. Elder skin and other tissues are more prone to bruises because they are thinner and less elastic.

Mostly, deep bruises are a result of sprains, serious falls, or broken bones. On the other hand, bumps, pinching, or suction on the surface of the skin cause superficial bruises. The healing period depends on the type of impact on the skin which caused the bruise and the severity of the bruise which determine the rate of healing. Generally bruises take around 2-3 weeks to heal. In case of certain bruises, the injured area becomes firm and starts increasing in size instead of going away.

This may be due to two causes:  1) hematoma or 2) heterotrophic ossification or myositis ossification. In hematoma, the body walls the blood off instead of trying to clean up the area. This collection of blood can be drained by a health-care practitioner. In ossification, the body deposits calcium on the area of the injury. This condition can be diagnosed by x-ray. This condition is less common. At times, small bruises called petechia appear as many tiny red dots clustered together. Such bruises should not be ignored. It should be noted that the most dangerous spot for bruises to form is the head and neck region. 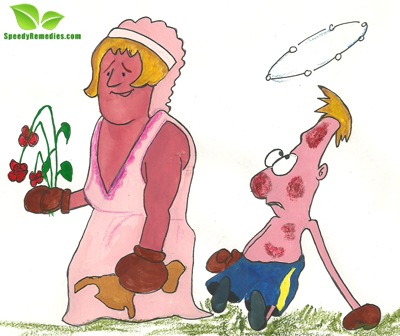 Causes and Symptoms of Bruises

Diseases like dengue hemorrhagic fever and certain disorders like anemia, obesity, leukemia and other immune and bleeding disorders increase the risk of bruises. In case of purpura simplex, because of increased fragility of blood vessels, there is a tendency to bruise easily. Moreover, use of medication like non-steroidal anti-inflammatory drugs, antidepressants, asthma medication, anti-clotting medications, aspirin and so on also increase the chances of developing bruises more readily. A body lacking in essential nutrients like the vitamin C and bioflavonoid is more likely to suffer from fragile blood vessels and is more prone to developing bruises even from slight injuries.

The most common reason for bruises is bumping and banging into things. Application of natural home remedies for bruises along with a healthy diet facilitates quick recovery in such cases.
Main symptoms of bruises are pain, swelling and skin discoloration. As mentioned earlier, the color of the bruise changes from red to blue or purple to yellow or green as the body carries out the healing mechanism eventually returning to the natural skin color.

• Applying arnica salve on the bruise absorbs the blood.

• Out of the many home remedies for bruises, the most common is applying a cold compress immediately after the bruise injury takes place. Place ice on a cloth and apply for about 15 minutes per hour.

• Apply a cooled mixture containing one part of cayenne pepper and five parts of melted Vaseline once a day.

• Raising the injured area to the heart level reduces swelling and bleeding.

• Compresses prepared from St. John’s wort herb, chamomile, fennel, witch hazel, and from the blossoms of calendula, peppermint can be used.

• A bag of frozen peas wrapped in a small towel can be put directly on the bruised area to reduce swelling and pain.

A diet rich in vitamin C, vitamin D, vitamin E, vitamin K and zinc is helpful in healing bruises and also reduces the risk of bruises. Green leafy vegetables, seaweed, broccoli, alfalfa, fish liver oils are rich sources of vitamin K. Antioxidant action of vitamin C and vitamin E increases the rate of cell and tissue reconstruction. Vitamin K facilitates normal clotting in blood. Items containing bioflavonoid (like reddish-blue berries) can also be included in the diet. Vitamin C facilitates the production of collagen in the body which is an important part of the supportive layer beneath the skin. This helps in reducing the chances of having bruises in minor injuries.