What is Common Fever?

Mammals including the human beings are capable of maintaining their body temperature, irrespective of the nature of surrounding environmental conditions. Thus, the humans exhibit the temperature constantly in the range of 36.9F-37.5F or between 98.4C-99.5C. Although the average/standard human body temperature is subject to change marginally with the change in kind of intake of food, volume of exercise and thermal reading of the envelope of atmosphere, surrounding your place of residence, yet it tends to remain in between the two ends of the ranges only.

Common Fever means that the body temperature doesn’t fall in between the normal temperature ranges, which is also an indication of the malfunctioning of body systems. The indisposition is considered the part of normal routine of lives by many people all across the globe, hence the name Common Fever.
Both the adults and children are vulnerable to common fever, irrespective of the fact that the common fever is not given due emphasis and importance, yet it can prove fatal, as most of the common fever can be dengue fever, malaria, typhoid, hepatitis (including its various stages), Kala azar, Cholangitis or Septicemia. So read on further to know various causes and symptoms of it, together with various natural home remedies for common fever. 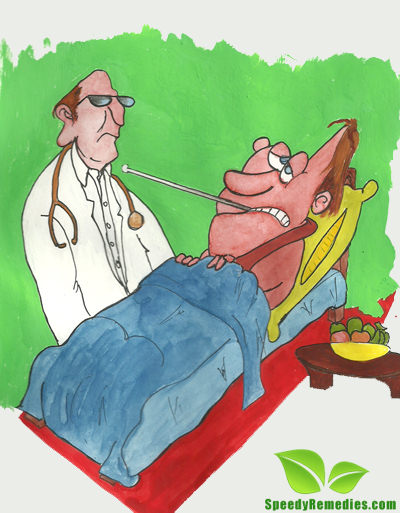 Causes and symptoms of Common Fever

Normally the body’s temperature ranges in between the normal range of either temperature scales, i.e. Fahrenheit or Celsius. But when an outside agent enters the body, resulting in the build-up of morbid matter inside the body, either due to contaminated food habits or living at unsanitary place, the body responds back in an attempt to counter check the adverse influence of same, by triggering its defense mechanism. When the body battles with the infection, it results in rise in the body temperature automatically, leading to common fever.

There might be different microbes, in the body which are capable of causing common fever, besides other causes. The details of which are as follows:
• Bacteria
• Virus
• Protozoan
• Sunstroke
• Consumption of chemical or poison
• FUO(Fever of unknown origin)
• Build-up of morbid matter
• Feeding habits of wrong track
• Unclean living conditions
• Too much physical labor
• Drawn-out drenching in rain
• Flawed prescription
• On account of other diseases like flu, common cold, typhoid, cholera etc.

As far as the symptoms of common fever are concerned, the common fever is itself a big symptom, which co-occurs with other symptoms like:
• Slight trembling
• Throbbing head
• Ache in body parts
• Thirstiness
• Great inaction
• Poor flow of urine
• Rapid pulsation and breathing
• Excessive Sweating
• Heaviness and burning in eyes
• Nausea
• Vomiting