What is Food Poisoning?

Consumption of food contaminated with harmful bacteria, viruses or toxins often results in Food Poisoning. The condition can be mild or severe depending on the exact underlying cause. The symptoms may range from mild abdominal discomfort, nausea and vomiting to bloody diarrhea. In some extreme cases, it can also prove to be fatal.

Apart from the therapeutic measures, following basic precautionary steps like washing fruits and vegetables thoroughly before cooking, cooking the food well, avoiding the use of oil that has already been used for cooking over and over again, storing foods in refrigerators after covering them, having packaged foods before their expiry etc can help avoid Food Poisoning to a great extent. 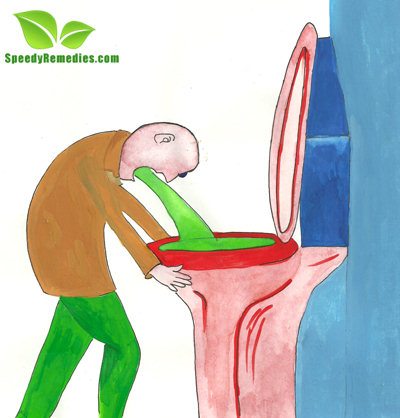 Causes and Symptoms of Food Poisoning

More often than not, Food Poisoning is caused due to intake of food prepared and stored in unhygienic conditions, food that has not been stored in the refrigerator at the right temperature or food that has not been cooked adequately and other similar reasons. Use of chemical agents like pesticides and insecticides also raises the risk of developing this problem.

Flesh foods, dairy products and ‘ready to eat’ foods are often associated with this problem because they tend to get contaminated quite easily. The most common types of bacteria and viruses leading to Food Poisoning are Campylobacter, Salmonella, Listeria, Shigella, E. coli, Norovirus, Rotavirus etc.

Pregnant women, infants, elderly people, Individuals with weak immune system and the ones suffering from chronic diseases such as Diabetes, Kidney Disease, Cancer are more likely to develop complications.

• Having two tablespoon of organic undiluted apple cider vinegar is one of the most popular home remedies for Food Poisoning home treatment.

• You can also try juice extracted from about lemons mixed with sugar. Do not add water.

• Prepare a mixture by grinding one teaspoon each of cardamom powder, poppy seeds, edible gum, two tablespoons of sugar and half a teaspoon of nutmeg powder. Take the resultant mixture after every two hours to help cure Food Poisoning at home.

• Taking a combination of ginger extract and lemon juice is one of the best natural home remedies for Food Poisoning related vomiting. You can also add some black pepper powder in the mixture.

• Consuming half a cup of yogurt mixed with powdered cumin seeds and fenugreek seeds helps in reducing Food Poisoning related symptoms considerably. Curd can also be taken along with two to three tablespoons of basil leaf extract, some black salt and black pepper.

• Rubbing a mixture of half a cup of soya oil and three drops of garlic oil on the abdominal area is can relieve abdominal discomfort and pain caused by this condition.

• Milk thistle is considered as a valuable herbal remedy to get rid of Food Poisoning caused by mushroom.

• Boiling some pieces of raw papaya in water for approximately 15-20 minutes and drinking the resultant mixture two to three times in a day works as a useful home medicine for healing this problem.

In order to reduce and control Food Poisoning embark on a nutritious diet consisting of bland foods and completely avoid highly spicy, fatty and seasoned foods. Eat fresh fruits and vegetables that are easily digestible. Inclusion of probiotic foods like curd is also recommended as it helps restore the balance of good bacteria in the gastrointestinal tract.

In addition, drink enough water at regular intervals throughout the day to prevent dehydration. In case, you find plain water boring, then you can also try buttermilk (preferably mixed with dry ginger), rice water and tender coconut water. However, do not skip plain water completely.

Follow the above mentioned mild natural home remedies for Food Poisoning and maintain proper hygiene while cooking and serving foods to prevent Food Poisoning in future.