Gallstones are solid lumps that generally develop when the bile present in the gallbladder hardens into stone-like collections of materials. The disease is mostly asymptomatic and hence remains undetected in most of the cases.

They usually grow at a slow rate and tend to cause problems after about 5 to 20 years, depending on the size of the stones. There are mainly two types of Gallstones, that is, pigment stones and cholesterol stones.

Pigment Stones are formed when the bile contains excess of bilirubin and Cholesterol Stones, as the name suggests are formed because of more amount of cholesterol in the bile.

Apart from various conventional methods of treatment, a number of home remedies for Gallstones natural treated have been found to be extremely beneficial in getting rid of this disease in a natural way. In severe cases, the affected the patient’s gallbladder may be removed surgically to get rid of this disease. 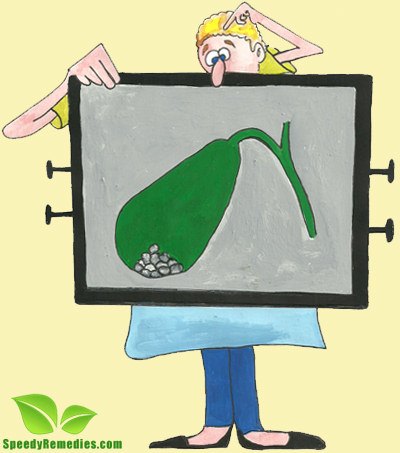 Hence, the condition is mostly caused by a chemical imbalance in the gallbladder. When Gallstones move away from the gallbladder and get stuck in any of the ducts carrying the bile from the liver to the small intestine, they tend to obstruct the normal flow of bile.

It has been observed that women are more susceptible to Gallstones as compared to men. Moreover, individual aged 60 years or more are more likely to develop this disease as the body tends to secrete more cholesterol into bile in case of older individuals.

Cholesterol Stones are generally yellow-green in color whereas Pigment Stones are usually darker in color. Gallstones are characterized the presence of either one large stone or a collection of many smaller stones. At times, the condition may be characterized by a combination of both these cases.

Symptoms of Gallstone attacks include problems like pain on the right hand side of the upper abdomen, pain under the right shoulder, back pain, nausea, vomiting, bloating, restlessness and other similar problems. Infection due to the presence of Gallstones may also cause fever.

Blockage of normal flow of bile for a long time due to Gallstones can lead to other diseases like Jaundice or Pancreatitis, depending on the type of duct being blocked.

• Soak about eight to ten almonds in water overnight. Crush them in the morning and then consume the paste so formed. Continuing this simple natural remedy for at least two weeks is one of the most successful natural home remedies for Gallstones.

• One of the oldest home remedies for Gallstones removal is to follow a particular dietary procedure consisting of a three day fast followed by the consumption of a combination of three ounces of lemon juice and the same amount of any unrefined vegetable oil, for instance olive oil on the second night.

Although, the doctors usually do not consider this remedy useful enough for the home treatment of Gallstones.

• Consumption of herbal teas prepared from herbs like Quebra Pedra, boldo etc can help flush out small Gallstones out of bile ducts. This cure, however, is not recommended for pregnant women and individuals suffering from diabetes or heart diseases.

• Massaging the abdominal area with a mixture of lavender oil, almond oil and rosemary oil and then placing a warm towel over it is one of the most popular Gallstones home remedies. However, pregnant women should not follow this home remedy as rosemary oil is usually not considered suitable for them.

• Alternative therapies like yoga and aromatherapy are also regarded as valuable natural cures for Gallstones. Acupuncture therapy is useful in avoiding Gallstones and other gallbladder problems as it tends to improve the flow of bile.

Having a healthy, balanced and low fat diet helps to control the weight and helps avoid Gallstones. Hence, a diet consisting of a variety of nutritious fruits and vegetables, especially the ones rich in fiber is highly recommended when dealing with Gallstones.

Moreover, foods rich in vitamin C are also beneficial in preventing as well as reducing Gallstones because vitamin C helps to break down cholesterol in the bile.

Besides, avoid having red meat and other foods with high amounts of saturated fats. Restrict alcohol consumption as well. Instead, drink plenty of water throughout the day at regular intervals.

Following the above mentioned natural home remedies for Gallstones and the other relevant dietary steps can help a great deal in curing this disease naturally.