Stomach gas is a common and equally embarrassing stomach ailment that is usually treated with the help of a variety of conventional medicines as well as natural treatments consisting of Gas home remedies. Passing gas a few times in a day is considered normal. However, when there is excessive gas, it is considered as an ailment that tends to cause symptoms like pain and bloating.

Gas may be accompanied by an unpleasant odor resulting from fermentation of the food in the intestine. The most common reasons leading to gas formation in the digestive tract are the normal breakdown of undigested food by bacteria and swallowing excess air. The swallowed air is mostly relieved by belching.

This common problem can be eliminated by following home treatment for gassy stomach. The treatment consists of a number of preventive as well as curative natural remedies to avoid and cure gas problems.

Moreover, following these herbal remedies on a regular basis helps to improve digestion thereby reducing the chances of developing gastric troubles in the future. 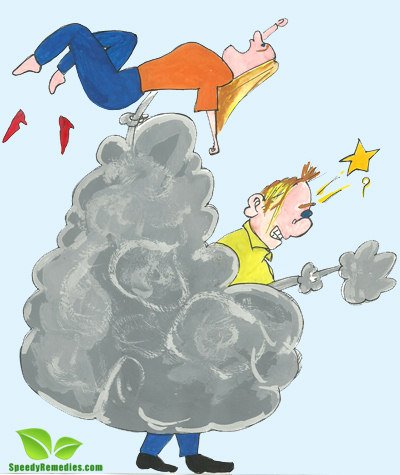 Causes and Symptoms of Gas

As already mentioned the normal process of breakdown of undigested food produces gas. Excessive consumption of gassy foods such as cabbage, broccoli, beans, prunes, apples, onions and other such starchy, sugary and fibrous foods increases the chances of developing this embarrassing problem. This happens due mal absorption of carbohydrates.

Although, it is worth noting that foods that tend to produce gas in one individual may not produce the same in another individual. This happens because of the favorable balance of bacteria that create hydrogen and the ones that destroy it.

Another common cause of Gas problems is Aerophagia, or air swallowing in simple words. Factors like chewing gum, wearing loose dentures, smoking, and eating or drinking rapidly contribute in excess buildup of stomach gas.

At times, the bacteria present in the intestines release small amounts of sulfur as well which in turn adds a faulty odor in the gas.

• Simply eating a teaspoon of fennel seeds is a tried and tested Gas home remedy that gives immediate relief from Gas. Mustard seeds also help in healing this condition.

Similarly, fennel tea prepared by steeping half a teaspoon of fennel seeds in a cup of boiling water for about ten minutes also works as a good natural remedy for Gas, Bloating and other such problems.

• Having a teaspoon of honey mixed with one drop of dill oil is a simple way to prevent Gas naturally.

• Take some slices of ginger and soak them in lime juice for some time. Chewing these ginger slices after meals is one of the most highly recommended natural home remedies for Gas, Indigestion and Bloating.

• Prepare a mixture by mixing together one teaspoon dry ginger powder, one teaspoon pepper and one teaspoon of green cardamom seeds. Finally, take half a teaspoon of this mixture along with some water one hour after having a meal.

• Massaging the stomach with warm oils like that of clove, cardamom, olive, fennel and ginger is a useful home remedy for easing Gas pain and other related symptoms.

• Drinking some warm water mixed with a pinch of asafetida serves as a successful natural cure for Gassy stomach natural treatment.

• A combination of ginger, asafetida and rock salt is one of the best therapeutic home remedies for Gas pain. To prepare this mixture, add some rock salt, a pinch of asafetida and half a teaspoon of dry ginger in a cup of warm water and drink it. This Stomach Gas natural remdy is sure to give immediate relief.

• Applying some coconut oil mixed with a pinch of asafetida on the stomach helps reduce Gas in babies.

• Yoga serves as an effective alternative therapy for Gas. Even exercising mildly by way of walking or stretching can help release Gas.

When dealing with Gas troubles, try to include foods like ginger, garlic, cinnamon, clove, parsley, papaya and other foods in the diet that aid in the process of digestion and help expel Gas.

Adding coriander seeds to meals and snacks is one of the simplest and most effective natural home remedies for Gas relief. Drinking adequate amount of water at regular intervals throughout the day helps to keep gastric distress at bay.

Interestingly, eating a bitter food at the beginning of a meal helps to prevent belching by triggering a reflux reaction in the digestive tract thereby releasing stomach acids that aid in proper digestion.