Bacterial infection in the overactive oil glands situated at the base of the skin generally leads to the formation of Pimples. They are usually pus-filled raised bumps on the skin. Pimples are ugly to look at and hence considered a source of social embarrassment. The face, neck, chest, back and even shoulders are some of the most common sites of this infection.

Frequent breakouts of Pimples are referred to as Acne. Infected blackheads and whiteheads usually lead to the formation of Pimples. Contrary to the popular belief, Pimples are not caused due to dirt, sweat, or consumption of oily foods, chocolates, etc.

Though, the popular conception that Pimples should not be squeezed holds true. The act of picking or squeezing Pimples is discouraged as it may lead to further inflammation and scarring. Although many over the counter medicines and creams are often suggested to cure Pimples, still people are more attracted towards the natural cures in the form of natural home remedies for Pimples because they are safer and cheaper than the conventions methods of treatment. 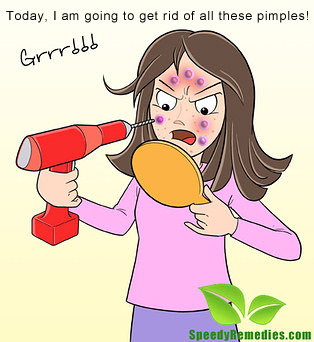 Causes and Symptoms of Pimples

Hormonal changes caused by menstrual cycles also contribute in the development of Pimple in women. Though, the problem tends to subside once the hormones settle down. Hereditary factors may also be held responsible for causing Pimples and Acne in some cases.

Medicines containing lithium, iodides, bromides, steroids etc have been associated with the worsening of Pimples. Repeatedly washing Pimple affected area may also aggravate the problem as skin tends to produce more oil in response to repeated washing and harsh scrubbing. Stress has also been associated, though indirectly, with frequent breakouts of Pimples.

Pimples are generally characterized by red or yellow colored inflammations on the skin. They are often filled with pus. When a Pimple is squeezed, the pus spreads on the surrounding area resulting in further infection. Moreover, the act of squeezing increases the probability of leaving behind scars even after the healing. These pus-filled Pimples are less commonly known as Pustules.

• Add lemon juice and rose water in equal quantities and apply this mixture on the affected area for about half an hour. Regularly following this remdial procedure for about three to four weeks is one of the most popular natural home remedies for Pimples.

• Honey is also considered good for skin. Applying a mixture prepared from three tablespoons of honey and one teaspoon of cinnamon powder over night is another popular natural cure for this irritating problem. This natural remedy is sure to give encouraging results if religiously followed for at least two weeks.

• A facial mask consisting of grated apple and honey serves as an effective home treatment for Pimples and Acne.

• Rubbing garlic on the affected area several times in a day is one of the most effective though smelly natural home remedies for Pimples. For quicker results, garlic should also be taken internally.

• Regularly applying the pulp of ripe tomatoes on the face for about an hour or so helps in the effective treatment of Pimples. Cucumber pulp can also be used in the same way with the same results.

• Raw papaya juice can be applied on the Pimples to cure Pimples naturally.

• Applying a mixture of coriander juice and some turmeric is an effective home remedy for Pimple treatment. Alternatively, if coriander juice is not available then mint juice can be used in its place.

• Add two to three teaspoons of dried basil leaves to one cup water and boil the mixture for about 15-20 minutes. Cool the mixture and then apply it on the affected area. This therapeutic home remedy should be followed on a regular basis to get rid of Pimples naturally.

• Mix some water in a mixture of crushed margosa (neem) leaves and turmeric to make a fine paste. Finally, rub the resultant mixture on the Pimples and leave it on the skin for about half an hour to heal Pimples successfully and remove the left over scars too.

• Take some roasted and powdered peels of pomegranate fruit. Next, add some lime juice to this powder to make a paste like mixture. Applying this mixture is one of the most valuable natural home remedies for Pimples.

• Take some fenugreek leaves, crush them and add sufficient water, just enough to make a paste. Apply this paste on the face over night and wash it off with warm water in the morning as an effective natural remedy for natural Pimple removal. This remedy is particularly useful for individuals with dry skin.

• Take some grinded nutmeg and add a little raw milk to it. Apply the mixture and leave it for about one or two hours. This natural home remedy is not only beneficial in curing Pimples but is useful in getting rid of their scars as well.

• Tea tree oil and aloe vera gel have anti bacterial and anti inflammatory properties that help in dealing with Pimples. Marigold and wheat germ oil are also effective against Pimples.

• Applying a mixture prepared from fuller’s earth and some water or rose water is a tried and tested Pimple cure. Fuller’s earth helps absorb excess oil from the skin.

Judicious mix of a variety of fresh fruits, vegetables, grains, seeds etc constitutes a healthy and balanced diet. A diet rich in vitamin A and zinc is highly recommended to deal with this problem. Moreover, consumption of wheatgrass juice helps in controlling Pimples effectively.

Oils extracted from corns, sunflowers, and safflowers have been associated with therapeutic properties for curing as well as preventing Pimples. Plus, regular and adequate consumption of fruit juices and water is considered favorable for the skin.

Though, fried and fatty foods do not cause Pimples by themselves, still they do not even help in the process of healing. Self control is the essence of any favorable treatment. Caffeinated and sugary products tend to produce toxins which are harmful for the overall health. Moreover, over consumption of junk food may prove to be unfavorable for the healing process.