You are here: Home / Amazing Tips / How to Cure Cough Naturally

A cough is a reaction of the body to irritants affecting the respiratory system. It is typically defined as the sudden act of expelling air from the lungs with a sharp sound. It can be a deliberate or involuntary act. Basically, it is the body’s way of expelling bacteria and should not be suppressed

There are 2 major types of coughs: 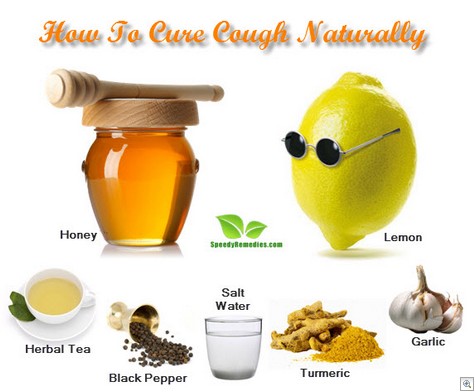 Apart from these two broad categories a cough may also be described as:

For the treatment of coughs caused by an illness or a viral, it is suggested not to use antibiotics as it can kill the good bacteria, but to let the body’s immune system take its course in dealing with the problem.

Some natural remedies can be followed to provide symptomatic relief while the infection runs its course. These remedies may prove to be better than the over-the-counter cough medicines available at the stores, as those medicines tend to suppress the cough which can result in a heavy and choked up feeling.

Honey, known for its analgesic properties helps immensely in soothing a cough. It is also rich in bacteria and virus fighting components.

Lemon is rich in anti-oxidants and Vitamin C which help boost the immune system and speed up the healing process, especially in the case of a cough or cold. The acidic nature of a lemon helps in neutralizing the phlegm that may buildup during a cough infection. It can be used in the following ways:

Besides the above mentioned remedies using lemon and honey there are a few other natural cures for cough:

For a speedy recovery from any infection, it is essential to get adequate rest, drink plenty of fluids, and avoid sugary and salty foods, along with dairy products and foods that contain starch as they may aggravate mucus buildup.

Plus, maintain a healthy lifestyle, avoid tobacco intake, and use filtered masks in places where there may be heavy pollution.