You are here: Home / Herbs That Cure / Liquorice (Mulethi) Benefits

Liquorice benefits the health in various ways as it strengthens bones and muscles. It is valuable in the natural treatment of bronchitis, sore throat, cough, chest congestion, mouth ulcers, peptic ulcers, kidney problems, lethargy, hair loss, and so on.

Moreover, it boosts the immune system, supports the glandular system, and improves the efficacy of other herbs. Liquorice or Mulethi is also used as a sweetener because of it pleasantly sweet, woody flavor similar to that of fennel and anise. 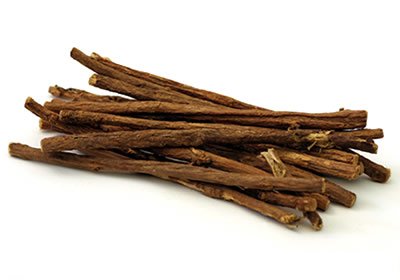 Liquorice root or Mulethi is a legume indigenous to Southern Europe and parts of Asia. It is grown in many parts of the world. This perennial herb belongs to the Fabaceae family.

Moreover, it increases fertility and brings testosterone levels down in women suffering from ovarian cysts. Plus, liquorice benefits in dealing with autoimmune diseases like lupus, rheumatoid arthritis, scleroderma, etc.

It is helpful in the natural treatment of low blood pressure and chronic fatigue syndrome. Furthermore, liquorice powder can be used externally to heal cold sores and genital herpes.

Check out this video giving information on liquorice health benefits.

It is believed that this herb slows the progression of HIV and has positive effects in managing cancers. In addition, taking liquorice root extract is useful in reducing symptoms of menopausal disorders as it regulates hormone production.

In terms of nutrition, liquorice is considered as a good source of iron. It is packed with bioflavonoids and antioxidants. The major active compound of this herb is glycyrrhizin, which is about 50 times sweeter than cane sugar.

It has a number of positive and therapeutic effects but is also likely to inhibit cortisol metabolism within the kidney. Thus, it is suggested not to use liquorice for more than 4-6 weeks when taking this herb for medicinal purposes.

Liquorice is also used as a natural mouth freshener and antacid. Plus, herbal tea prepared from liquorice (Mulethi) alleviates nervousness, anxiety and depression. The Japanese use this herb for treating viral Hepatitis. Thick liquorice sticks are usually sweeter than the ones that are thin.

Side effects of liquorice include water retention (retention of sodium and loss of potassium), stiffness in joints, headache, stomach ache, and shortness of breath.

Excessive consumption of this herb over a period of time may also cause high blood pressure, cardiac depression, and increase blood glucose levels.

Deglycyrrhizinated liquorice (DGL) preparations, however, may reduce the chances of developing these side effects. DGL is not effective in providing relief from respiratory infections, though.

Individuals suffering from diabetes, chronic liver inflammation, and cirrhosis of liver should avoid using this herb. Moreover, liquorice is likely to interfere with certain heart medications and diuretics. Besides, it is contraindicated in case of pregnant women.