Oregano, also known as Wild Marjoram or Spanish Thyme, is an important culinary herb native to Eurasia and the Mediterranean. It is a major constituent of the Mediterranean diet. Botanically, this herb is called Origanum vulgare.

Apart from adding flavor to the food, oregano also provides a number of health benefits. It is mostly used to treat respiratory tract disorders such as asthma, bronchitis, cough, etc.

Moreover, it helps relieve bloating, heartburn, menstrual cramps, urinary tract disorders, and the same. It also fights against bacteria, viruses, fungi, parasites, and intestinal worms. Oregano is excellent for your brain too. Let’s find out how. 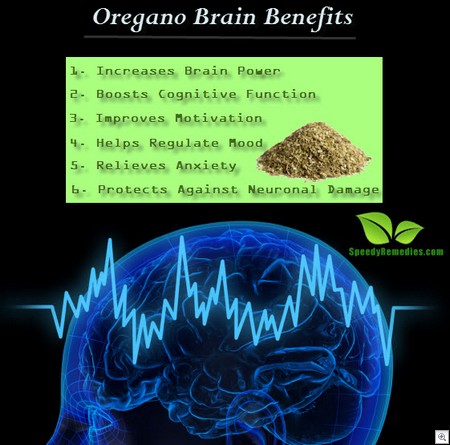 It boosts your brain power and improves your mental wellbeing. It is believed that this herb has antioxidants that protect against neuronal damage.

In addition, oregano has potent antioxidant properties that fight against cancer and heart disease. A report published in the Journal of Nutrition indicates that this herb contains a high concentration of antioxidants.

You can store fresh oregano in the refrigerator for up to three days. Make sure you keep it in a plastic bag. Dried oregano can be stored in a cool, dark place up to six months.

However, those who are allergic to basil, mint, sage, lavender, and other plants from the Lamiaceae family may be allergic to oregano, too. Moreover, it may lower blood sugar levels and interact with drugs such as anticoagulants and hormonal agents.