You are here: Home / Health & Diet / Signs and Symptoms of Lyme Disease

Lime disease is caused by the bacterium Borrelia burgdorferi and is transmitted to humans through the bite of infected black legged ticks.

Black legged ticks or other species of ticks can carry these bacteria. They can pick up the bacteria when they bite a deer or mice that are infected with the bacteria. This is then transferred to humans when the tick bites them.

Lyme disease is the most common tick-borne disease in North America and Europe. It is a rapidly spreading infectious disease with approximately 30,000 new cases being reported to the CDC every year.

Recently, there has been an increase in the number of cases being reported, as the tick population increases. Warming temperatures have made regions like Canada, Minnesota more hospitable. Deforestation for constructing houses has made humans be in closer contact with ticks and animals which carry them, like deer.

With such a prevalence of Lyme disease, it is important to know what are the signs and symptoms so that you are able to recognize it and get appropriate medical attention. 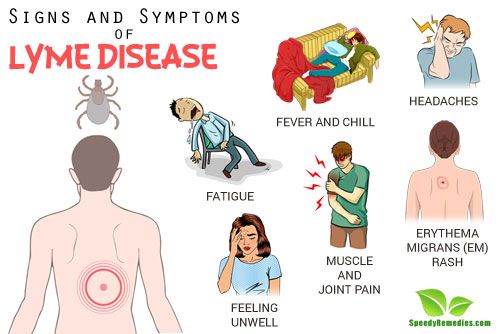 Signs and Symptoms of Lyme Disease

This stage occurs when the infection hasn’t yet spread to other parts of the body and is restricted to only the affected area. The symptoms experienced during this stage are similar to a cold or flu:

EM rash, or bull’s eye rash is flat or slightly raised red spot on the area of tick bite. It begins in about 7 days after the bite, although the time period can range from 3 to 30 days.

The rash keeps expanding gradually, expanding up to 12 inches. It is usually not painful or itchy, although may feel a bit warm to touch.

If left untreated, the rash can continue for about 4 weeks or more.

Weeks or months after the infection started, it can spread to other parts of the body through the blood stream.  The signs of this stage are:

Signs indicating the onset of third stage can occur months or years after the infection starts. This is the stage when the disease has completely spread to each and every part of the body. The symptoms experienced in this stage are severe and can be disabling and sometimes permanent.

Signs of the third stage include:

If the right antibiotics are provided at an early stage, Lyme disease can be completely eliminated and people are cured most of the time .

Antibiotics commonly used for oral treatment include doxycycline, amoxicillin, or cefuroxime axetil. Patients with certain neurological or cardiac diseases may require intravenous treatment with drugs such as ceftriaxone or penicillin.

To prevent contracting the Lyme disease, you have to protect yourself from ticks so that they don’t bite you.

Be careful during warmer months as it is during this time that ticks are commonly found.

Do not go hiking into areas with tall grass or woods during summers. If you do go hiking, remember to cover yourself by wearing full sleeves shirt and long pants with the pants firmly tucked inside the socks so as to avoid any exposure.

Spray insect repellent on your body as well as your clothing.

Wear light colored clothing so that any ticks on your clothes can be easily spotted.

After reaching home, check all your clothing and body thoroughly. Take a bath as soon as possible to remove any unseen ticks. Wash your scalp properly.

Put your clothes in a hot dryer to kill any pests that may have clung on to it.

How to Remove Ticks

If you find a tick attached to your body, here is how you can remove it:

Never, ever use your fingers to remove the tick.

Use tweezers to grasp the tick close to its head or mouth. You can use a paper towel, if needed.

Pull it out in a steady motion.

Do not crush or squeeze the tick.

If a part of the tick remains in your skin, try removing it with tweezers. If it cannot be removed, go to the hospital.

After it’s out, clean the area with rubbing alcohol or soap and water. Remember to wash your hand too.

Put the tick in a jar. If you notice any symptoms of Lyme’s disease, go to the hospital, taking the jar with you.

Fabhow: How to Remove a Tick

WebMd: Lyme Disease: What to Know This Season