You are here: Home / Health & Diet / Symptoms of Sinus Infection You Should Be Aware Of

Sinuses are a network of hollow cavities in the skull that are filled with air and produce and drain mucous around your nose, eyes and cheeks.

Sinuses humidify the air you breathe in, insulate your surrounding structures, increase your voice resonance and act as a buffer against face trauma.

Sinus infection is the inflammation of the sinuses, often caused by bacteria. This stops the normal flow of mucus and it gets accumulated in the sinuses. 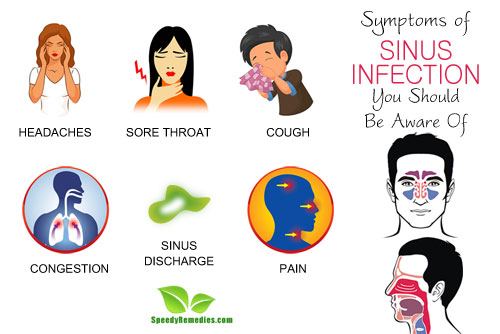 There are various types of sinus conditions that can occur, like:

Sinus infections can sometimes be mistaken for a cold, and vice-versa, as they have similar symptoms. It is only through proper testing that it can be determined what the cause is.

Some of the symptoms to look out for, in case of sinus infections are:

The constant pressure caused by the mucus build up and swelling in the sinuses can cause a sinus headache. Sinus headaches are different from normal headaches or migraines because the pain can get worse due to movement, especially when bending down.

They can get worse after you get up from your sleep as laying down causes the mucus to accumulate. Sudden temperature changes can also worsen the headache.

Swelling in the sinuses restricts the flow of mucus as well as air. The blocking of nasal passages makes you indifferent to taste or smell. Also, your voice sounds stuffy.

Postnasal drip can make your throat ache. If your infection lasts for more than a few weeks, the mucus can irritate and inflame your throat as it drips, leading to a painful sore throat and hoarse voice.

The discharge from the sinus can drain to the back of your throat, making it irritated. When this goes on for prolonged period of time, it can lead to a persisting cough.

The cough gets worse when you lie down and immediately after you get up from sleep.

When you blow your nose during a sinus infection (which is quite often), you will notice a greenish-yellow discharge from your nose.

This discharge results from the infected sinuses and drains into your nasal passage. It can also drain into the back of your throat, which is what is commonly referred to as postnasal drip.

This is the most common symptom of sinusitis. You might feel a throbbing pain behind your eyes, nose, forehead and jaw.

Swelling in the sinuses leading to a mucus build up can also cause a dull and constant pressure in those areas.

You might also be prescribed anti-biotic if your infection is caused by bacteria. The course will probably go on for 10-14 days.

If you sinus is caused by allergy, immunotherapy or allergy shots will be administered to help reduce body’s reaction to allergens.

Persistent sinus infection that does not respond to treatments or becomes worse will have to be treated with a sinus surgery. It happens in very rare cases.

Your doctor will talk you through the mode of treatment that is right for you, after he or she conducts the tests required.

Sinuses affect close to 34 million Americans. It is a fairly common problem, and usually goes away after 5-6 days. If your symptoms persist, get a medical checkup done to get a clear idea about your condition.

WebMD: Is it a Cold or Sinus Infection